A preliminary set of placemarks (ANE.kmz) for Google Earth of a selection of the most important archaeological sites in the Ancient Near East can be downloaded here (as an alternative try right-click or ctrl-click).

Ancient Near East Placemarks on Google Earth with alphabetic listing.

ANE.kmz works with Google Earth, which has to be downloaded (free at earth.google.com). When opened inside Google Earth, ANE.kmz gives, to the left, an alphabetic list of ancient sites and, to the right, on the satellite photo the same sites marked. For the moment, there are some 2500 sites with modern names; among them some 400 have ancient names. Additions of more sites are planned.

Ancient name is written without parenthesis. Modern name is within parenthesis. Most sites have been identified on the satelite photos. However, a few sites are only placed in the possible area, e.g. in a village with the right name when the site may be outside (if so marked with question mark ? after the parenthesis around the modern name). Question mark after ancient name means that identification is not yet proven. Question mark efter modern name (but before parenthesis around the name) means spelling of name uncertain. Two question marks ?? at the end indicate that it may not be a site but could possibly be a natural hill.

The preliminary work has received support from the University of Uppsala, the Urban Mind Project at Mistra, and the Excellence Cluster Topoi at Freie Universität Berlin.

A short introduction to the project dealing with ANE on Google Earth can be read in my manuscript paper Ancient Near East on Google Earth: Problems, Preliminary results, and Prospect.

With Google Earth already installed, just double click the ANE.kmz icon. You find all archaeological sites listed in your left panel of Google Earth under Places/My Places. They can be rearranged, deleted or extended later on by yourself. Double click the name of a city in your left panel in order to go to the site. (Due to a program bug, people having Adobe Photoshop may experience that this program tries to take over the .kmz file. If so, choose open with Google Earth, or open the .kmz file from inside Google Earth.)

There are two options after the first session.
1. You never save when leaving Google Earth. Then you keep your ANE.kmz and double click the icon each time you want to use it.
2. The alternative is that you save when leaving Google Earth when beeing asked. Now you keep the placemarks in your left panel. If you use this possibility it is important that you delete the ANE.kmz file because otherwise you will get duplicate names.

Two alternatives:
1. If you never saved before leaving Google Earth you can just throw the old ANE.kmz away and use a new downloaded ANE.kmz.
2. If you saved, you have all cities listed inside Google Earth. Go to your left panel and mark My Places (if you want to get rid of all there) or all the site names from the old ANE list (if you have more to keep in My Places). Delete what you have marked. Now double click the new ANE.kmz icon and save when leaving Google Earth, if you want to keep the new placemarks. If you don't delete the old ones, there will be double names on every site in Google Earth. Delete the ANE.kmz file if you saved the placemarkes inside Google Earth.

Until someone else comes up with a better, more permanent solution, these placemarks may be updated. Any correction or addition with coordinates could be sent to Olof Pedersén. No support is offered.

A preliminary overview of the waters of the Mesopotamian floodplain can be downloaded here. 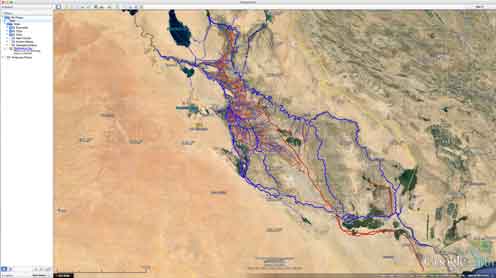 A short introduction to the project dealing with waters especially in the Babylon area can be found in my paper Waters at Babylon.

This index contains a basic set of primary spatial, toponym, attribute, and external link information on more than 500 archaeological locations (v.1.2 1 May 2020) where texts written in cuneiform and derived scripts have been found. All resources are released under a Creative Commons Attribution 4.0 International License. The index and its application is described in more detail in Rattenborg et al. 2021 “An Open Access Index for the Geographical Distribution of the Cuneiform Corpus” Cuneiform Digital Library Journal 2021:1. The index is intended as a tool for students and researchers in cuneiform studies and related areas and as an aid to cultural heritage managers and educators in communicating and safeguarding this unique body of world written heritage.

Versions v.0.x are prepared by Rune Rattenborg and Memories For Life: Materiality and Memory of Ancient Near Eastern Inscribed Private Objects, a research project based at Uppsala University and the University of Cambridge financed by a Research Project Grant from the Swedish Research Council (grant no. 2016-02028). Versions v.1.x and higher are prepared by the authors mentioned above and Geomapping Landscapes of Writing (GLoW): Large-scale Spatial Analysis of the Cuneiform Corpus (c. 3400 BCE to 100 CE), a research project based at the same institution and funded by Riksbankens Jubileumsfond, the Swedish Foundation for Humanities and Social Sciences Research (grant number MXM19-1160:1) for 2020-2022.

Draft versions of the index are stored with the University of Uppsala Department of Linguistics and Philology, hosted by Jakob Andersson. Public versions are available from the European Union open-access repository Zenodo, where the index can be downloaded in a variety of formats. These include .kml (suitable for use with GIS applications and Google Earth), .csv (for database integration) and .geojson (for GIS and web mapping applications). Use the general record DOI 10.5281/zenodo.4960710 to see the public versions and downloads.