A digital model of Babylon is under development. Both archaeological material and ancient texts are used on a detailed level for the reconstruction of this famous ancient city. Architectural computer programs are used for building the model, which is placed in environmental and historical contexts. An integrated GIS analysis is used for the city’s relation to the surroundings on different scales. The model will be used for developing and testing alternative reconstructions, creating new questions and providing answers. The development of the city is shown on different historical levels. Maps and other drawings are exported from the model. 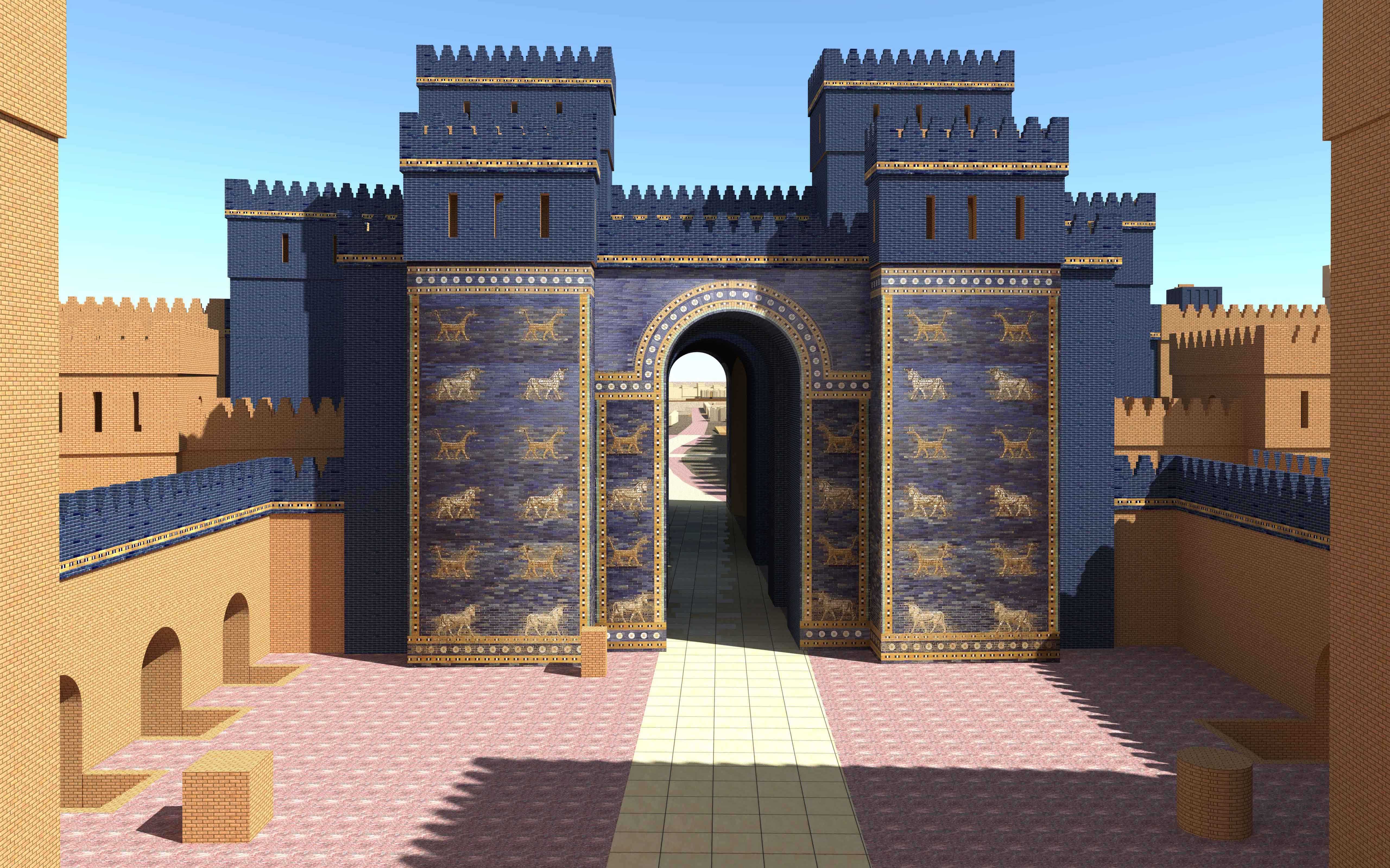 Model of Babylon during the final part of the reign of Nebuchadnezzar II. Processional Way in front of the Ishtar Gate of glazed bricks. Street covered with limestone and breccia stones.

The ArchiCAD program is used for the model and the Artlantis program for the renderings. The preliminary work has been part both of the Urban Mind Project at Uppsala University and the Excellence Cluster Topoi at Freie Universität Berlin. Inspection on site has been facilitated by Word Monuments Fund and State Board of Antiquities and Heritage. The project is associated with the Babylon project at Vorderasiatisches Museum in Berlin, where a reworking of the findings of Koldewey’s famous excavation 1899-1917 is in preparation.

It is the intention in the coming years to use the model for detailed interpretations of the different periods of the city’s history thereby including both the large numbers of contemporary ancient texts and the archaeological material. The large-scale excavations with registration of find spots of huge numbers of objects combined with the use of modern technology allow for promising advances in the interpretation of Babylon.

Probably at least from late Old Babylonian times until the beginning of the reign of Nebuchadnezzar II, ca. 1600-600 BC, Babylon consisted of two city areas with the Euphrates flowing in the middle. The central areas with the Marduk temple, the zikkurrat, the palace and the Ishtar Gate, were situated on the eastern riverside in the same traditional places as well-known from later periods. Town walls with moats surrounded the city. Most of the buildings were constructed with unbaked bricks, the traditional building material in the Ancient Near East. 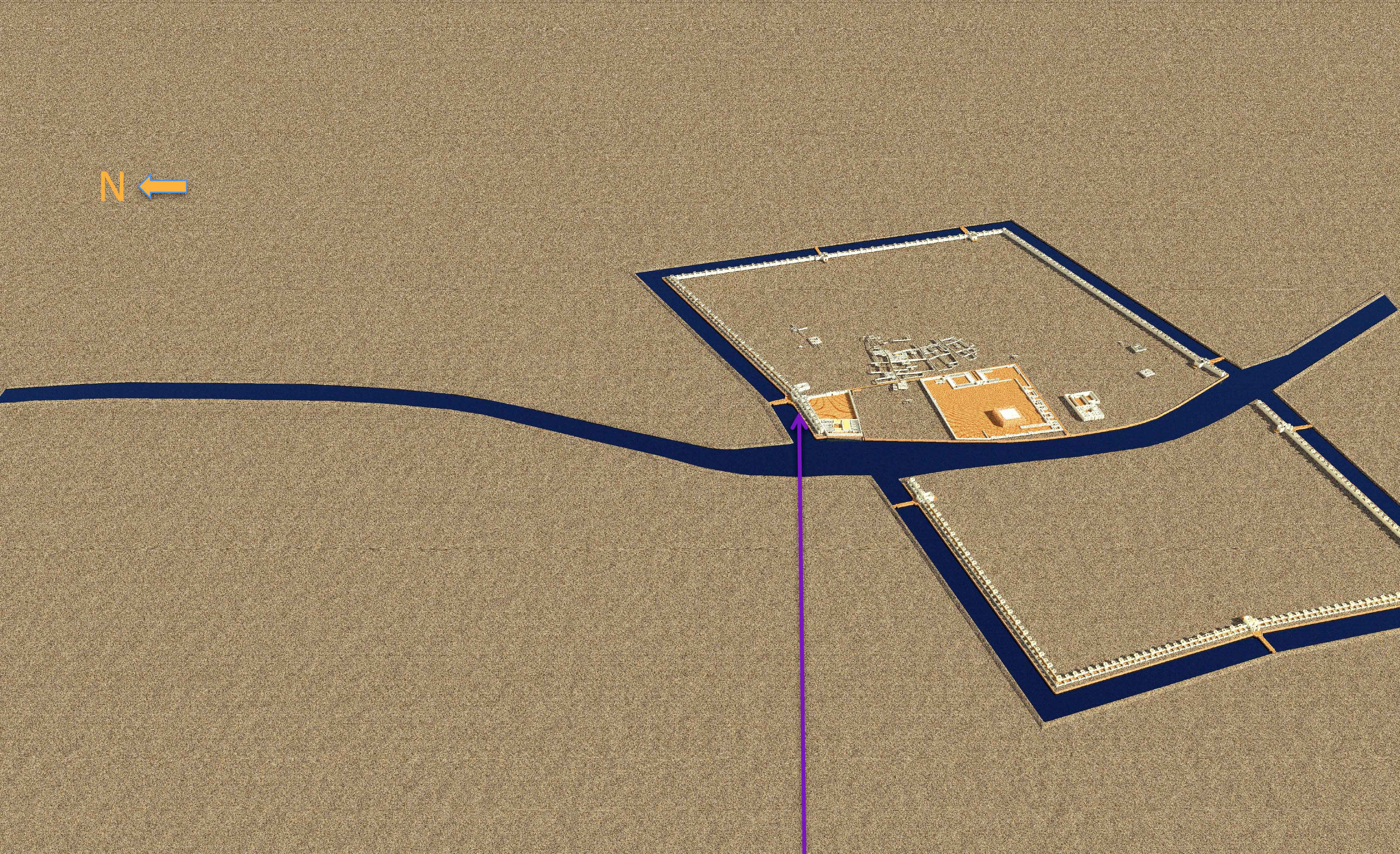 Model of Babylon during the reign of Nabopolassar (625-605 BC) looking in eastern direction. White walls of unbaked mudbrick (libittu) and reddish walls of baked brick (agurru) here as on all following pictures. The Euphrates is flowing in the middle, city walls with moats are encircling the city. The Ishtar Gate is in the northern city wall.

During the reign of Nebuchadnezzar II (604-562 BC), when Babylon was the centre of the large Neo-Babylonian Empire and the leading world metropolis, the city area was doubled and a new town wall with moat was built in the east. Many of the monumental buildings were rebuilt on a much larger scale and baked bricks, not the traditional unbaked ones, were used in huge quantities as building material. During the following 2500 years these good brick walls were gradually demolished and the bricks were reused for buildings in other cities. The German excavations some 100 years ago directed by Robert Koldewey finally succeeded to stop most of the demolishing and provided a rather well documented basis for all further studies. 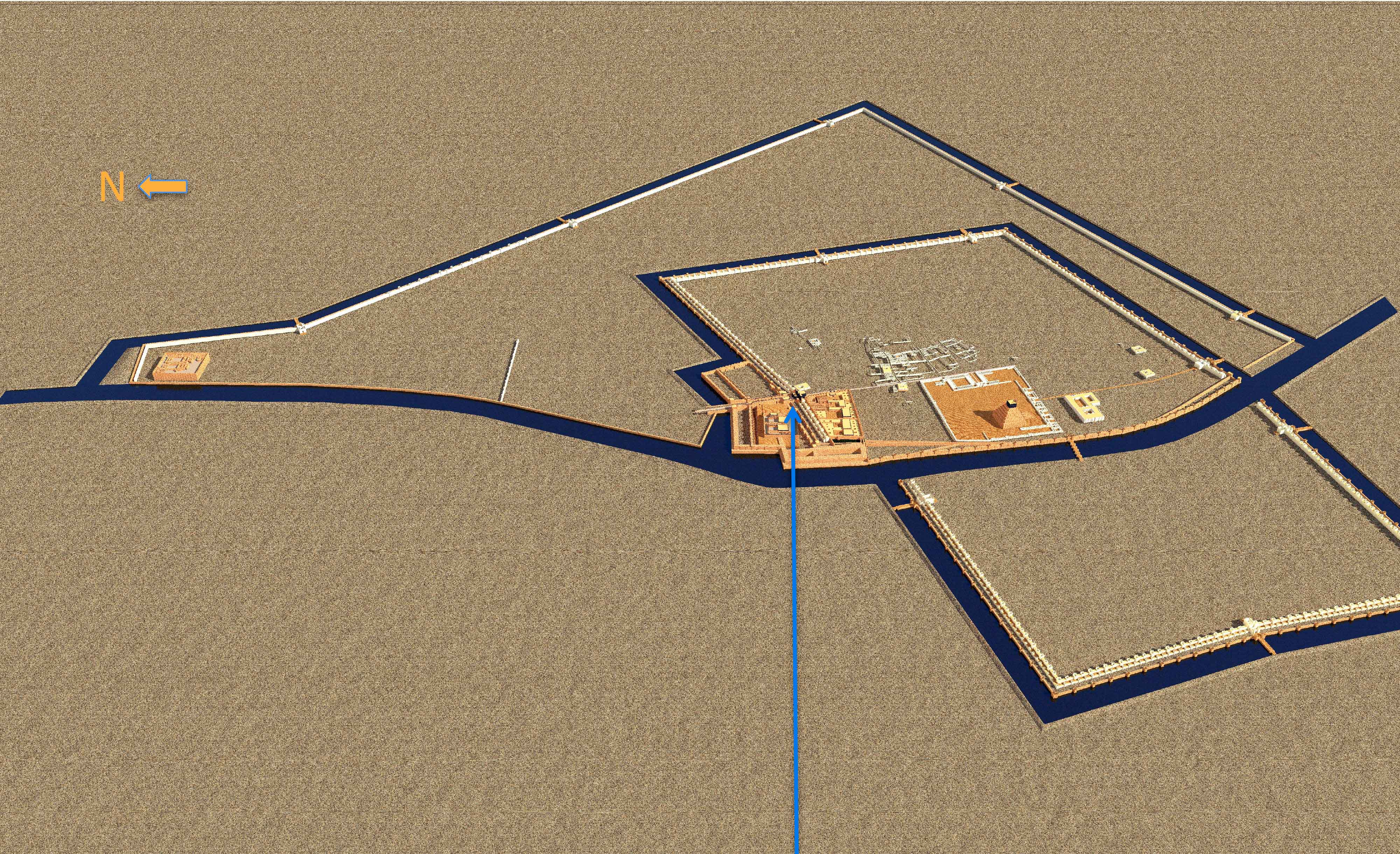 Model of Babylon during the reign of Nebuchadnezzar II (604-662 BC) and Nabonidus (555-539 BC) looking in eastern direction. The Euphrates is flowing in the middle, city walls with moats are encircling the inner and outer city. The Ishtar Gate is in the centre of the expanded city and central in the palace area.

Babylon during all known periods before and after Nebuchadnezzar will also be reconstructed within the digital model covering in different ways the time from the Old Babylonian period until today.

DEVELOPMENT OF THE PROCESSIONAL Way

For some areas of Babylon, there are more details in the model. The Processional Way north of the Ishtar Gate has on the walls in the model received parts of the well-known decorations with glazed relief brick. On the walls of the street, several of the famous glazed relief lions can be seen, and some trials of bulls and dragons have been preliminary placed on the Ishtar Gate. Walls in the palaces known to have had such decoration have reconstructed decoration, but where the details have to be studied, is just covered with blue bricks in the present state of the model. 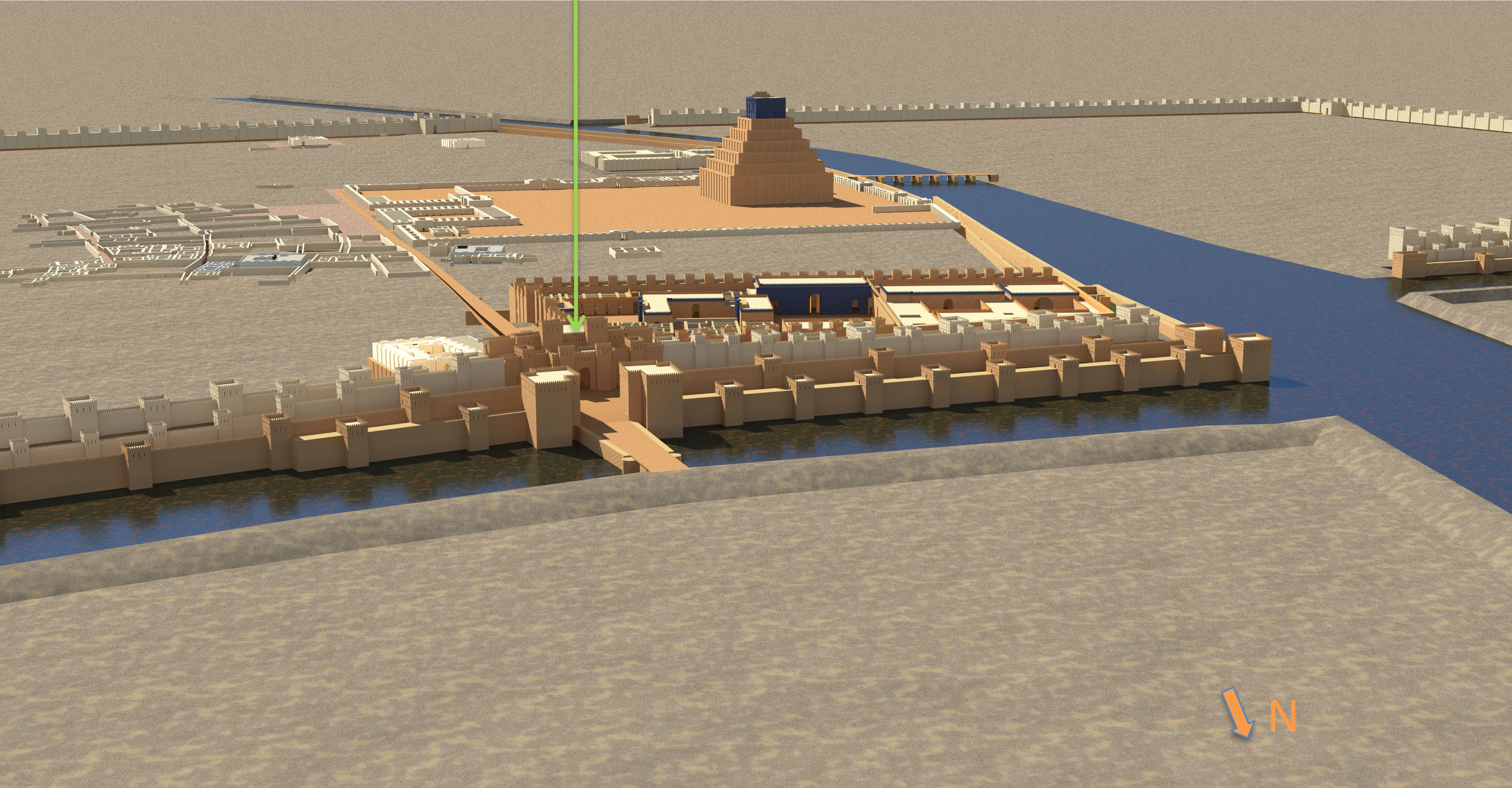 Model of central Babylon with palace area and the Ishtar Gate during the early middle part of the reign of Nebuchadnezzar II looking in southern direction. The Ishtar Gate has been rebuilt as a double city gate of baked brick with reliefs. The expanded palace, the Ishtar Gate and the Processional Way are on a raised surface. 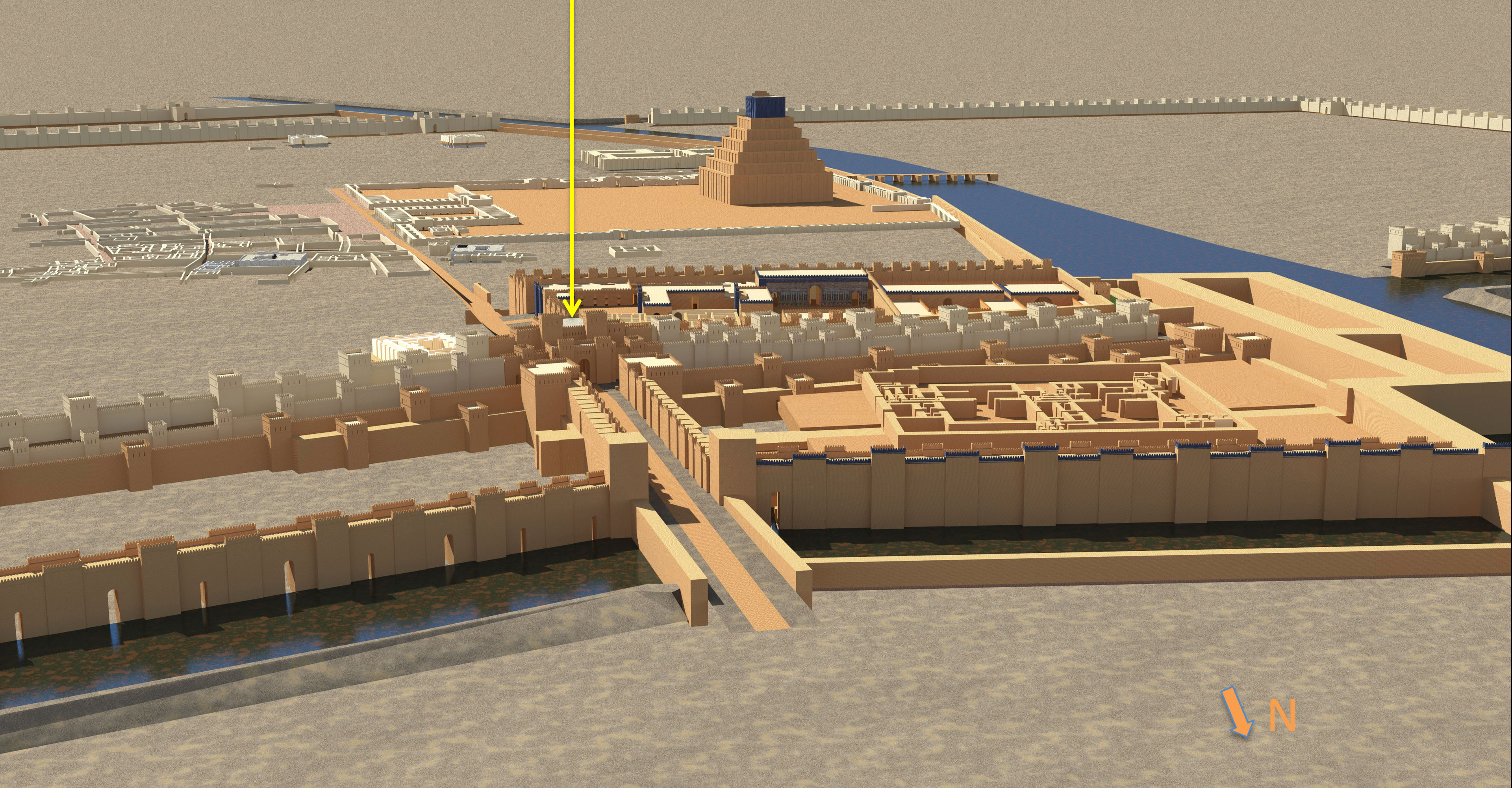 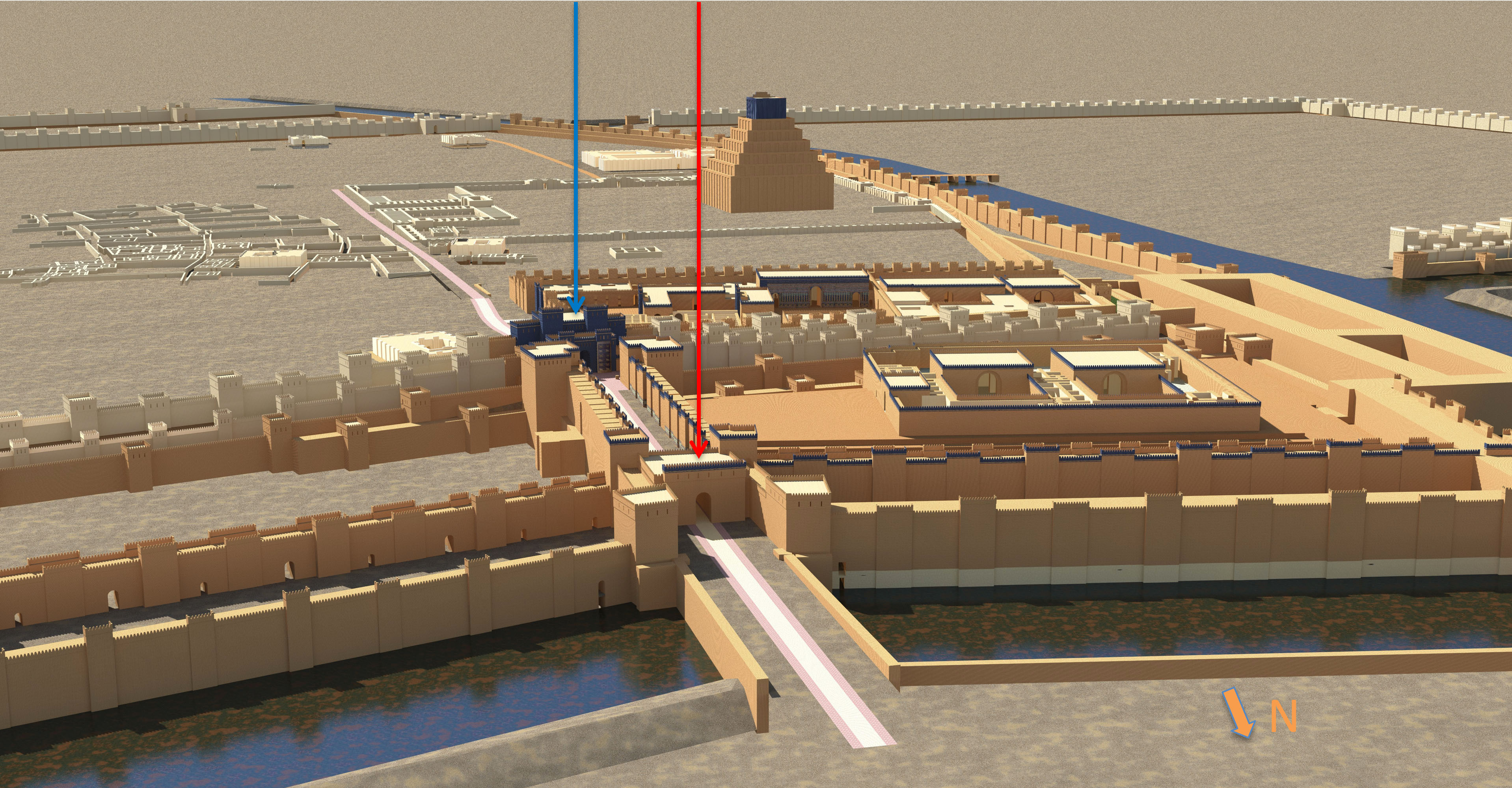 Model of central Babylon with palace area and the Ishtar Gate during the final part of the reign of Nebuchadnezzar II looking in southern direction. The Ishtar Gate has again been rebuilt as a double city gate now of coloured glazed baked brick with reliefs. The further expanded palace, the Ishtar Gate and the Processional Way are on an even more raised surface and there is a North Gate protecting the glazed brick section of the street.

The reconstruction of the different levels of the elevations of the Processional Way during the reign of Nebuchadnezzar in the area north of the Ishtar Gate can be given as an example of the technical possibilities. The street was elevated some 20 meters during the 43 years of Nebuchadnezzar's reign according to excavations and cuneiform texts. The three figures above show three of the Nebuchadnezzar levels as they are presently reconstructed. The uppermost level had the decoration of glazed bricks with relief figures on the side of the street. The middle street level from above is the well-preserved street level, which today can be seen when visiting Babylon. The documentation of the reconstruction will be published elsewhere.

Most of the work on the model still remains. An integrated approach with archaeology and ancient texts combined with modern technical and environmental studies is planned for the continuation of the project.

Preliminary Maps of Babylon with corrections and additions from satellite images. The maps do not show any specific period but are composed of important buildings from all periods of the history of Babylon. Printable on colour printer in any size A0 to A3. A4 may result in a bit small script. Reuse possible without further permission.

A selection of other materials dealing with Babylon can be found here. Reuse without further permission possible.

A preliminary walk around digital model of Babylon at the end of the Neo-Babylonian period. Please, use the program's Reference Card and User Guide for technical help with navigation and the maps and articles here as guides to the different areas and buildings.

1. Babylon Nabonidus: preliminary digital BIMx hyper-model of Babylon. It is possible to walk around in the city and enter some of the buildings. The buildings are in various advanced state of study and reconstruction and are planned to be developed in the future. 200 MB download to be viewed in BIMx Desktop Viewer.
2. Free download of BIMx Desktop Viewer for Mac and Windows from Graphisoft. User Guide and Reference Card on the same page. Free download for mobile units see App Store or Google Play.

Short introductions to the project with some preliminary results can be found in my articles.

1. Work on a Digital Model of Babylon using Archaeological and Textual Evidence. 2011.
2. The Ishtar Gate Area in Babylon. From Old Documents to New Interpretations in a Digital Model. 2018.
3. The Glazed Bricks that Ornamented Babylon. 2020.

A book summarizing the study of the German and Iraqi excavations in Babylon using the digital model is available.